It is always good to hear of other public spaces being upgraded so the Friends of Cuthill Park were pleased for the neighbouring town of Tranent when they heard a new £100,000 children's play area will be built there.

Polson Park is the largest open space in the town but the existing play area has become run down and provides limited play opportunity. Recent surveys carried out in Tranent indicated that the play area was the single most popular reason for people to visit the park but improvements were required.


"Polson Park is an important asset for Tranent residents but visitor numbers have dropped recently because it has become run down. A major restoration plan was prepared for the park but unfortunately failed to secure Heritage Lottery Funding in 2009. East Lothian Council remains committed to upgrading facilities within the park and I am delighted that the work for the new play area will shortly begin. I know from similar projects across the county that the play area will attract children, their friends and families to the park. It seems particularly appropriate that the park will continue to be enjoyed by new generations of local residents as we approach its centenary year."


Polson Park was gifted to the people of Tranent back in 1911 by the trustees for the Polson family. The foundations of the park were laid out in the following years through the creation of formal walks, turfing and fencing. In 1925 the Tranent Miners welfare committee began the process of developing the park as 'a recreation ground providing facilities for outdoor exercise for the community'. The plans for the park dating from this time show that it was to be divided into four distinct sections - a games area, a children's play area, a formal garden and an open area for juvenile sports. This basic layout of the park remains today.
The existing play area equipment will be removed and the new equipment will be appropriate for pre-school children, early primary years and 10-14 year olds. Seats and litter bins will also be installed for picnic provision and the play area will be completed for opening by Easter 2011. In addition to the new play area East Lothian Council will also upgrade the path infrastructure of the park.

We hope this bodes well for our own plans to upgrade Cuthill Park.
Posted by Ethical shopping at its very finest at 16:00 No comments: 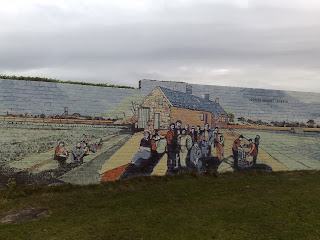 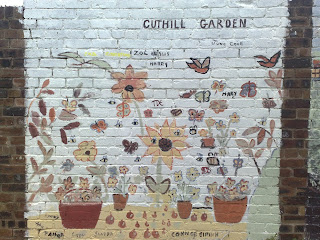 The latest pieces of artwork to adorn the park's walls are the 'Lowes Market Garden' mural and 'Cuthill Garden'.  Both murals are collaborative works painted as part of The Big Draw.


The murals aren't the only new thing in the park: the area earmarked for the community garden has been flattened by a digger loaned from Cockenzie Power Station.  Lorraine and her colleagues from Mobex have kindly strimmed away the area along the metal fence ready for planting some hedging. 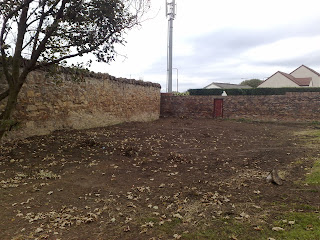 Prestonpans, like the park itself, is forever changing.  There are several new housing developments within walking distance from the park and we welcome residents new and old, to come and be part of its transformation.

On the practical front, we could do with some pallet collars (not pallets) which are always to be found on building sites.  They are perfect for building raised beds and, as they are stackable, would be great for making potato towers.

Next work-in day: Friday 22 Oct, 1p.m.  taking delivery of compost and filling half barrels.  Family-friendly, come along and help.
Posted by Ethical shopping at its very finest at 06:43 No comments: 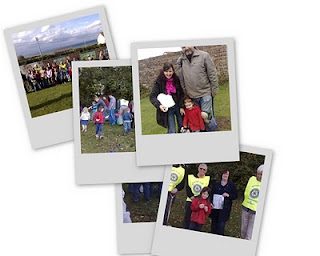 After days of heavy rain showers we were fearful that the day of the Big Bulb Plant might be another soggy one....but no it stayed dry and bright.
The task in hand was to plant one thousand purple crocuses (kindly donated by the Longniddry & District Rotary Club as part of their Focus on the Crocus campaign) along with a further 50 Ruby Giant crocuses, 50 Purple Sensation hyacinths, 50 Remembrance crocuses, 50 Queen of Night tulips and 50 Curly Sue tulips (which were given to us for being one of the first 100 groups to register for the Big Bulb Plant).
Luckily, help was on hand in the form of the1st Prestonpans Guides, the Rotarians, Friends of Cuthill Park, our MP Fiona O'Donnell, friends and families.
We can't wait to see the blaze of purple next spring! 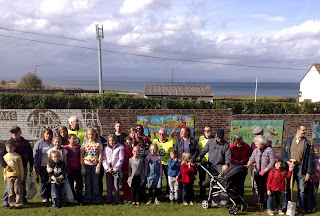 Thank you everyone for mucking in - you're blooming brilliant!
Posted by Ethical shopping at its very finest at 09:41 No comments: